How to visualize the waveforms¶

Programs that run on your phone or browser¶

Programs that run on your Raspberry Shake¶

The helicorder plot is a web-based application native to your Raspberry Shake that displays 12 hours of data at a time like this:

The helicorder is not updated in real-time. For real-time data use Swarm or seisgram2k.

You can adjust the helicorder’s scale by visiting the Raspberry Shake’s webpage at http://rs.local/ >> Settings icon >> DATA >> Helicorder Scaling Value.

Programs that run natively on your desktop or laptop computer¶

Since many of the programs below work in real time, it is important that your local desktop computer or laptop where the programs are executing has correct time. Most computer can easily sync their system times to “Network Timing Protocol” or NTP servers.

There are a lot of programs available that you can install locally on your desktop or laptop computer for data visualization and interrogation. These programs generally connect remotely to your Raspberry Shake via a special communication protocol called SeedLink. In the case of Swarm, you can also easily connect to the Raspberry Shake Community server to see waveforms from all of the other Raspberry Shakes in the world- and there are HUNDREDS of them!

jAmaSeis, a program for visualizing waveform data, and determining earthquake locations/ magnitudes, was developed by IRIS for the Seismographs in Schools program. Raspberry Shake funded the changes need to make jAmaSeis Raspberry Shake and SeedLink-compatible in early 2017.

jAmaSeis, which is installed on your desktop or laptop runs on all platforms (Linux, MAC, Windows) and connects remotely to your Raspberry Shake to acquire the waveform data. 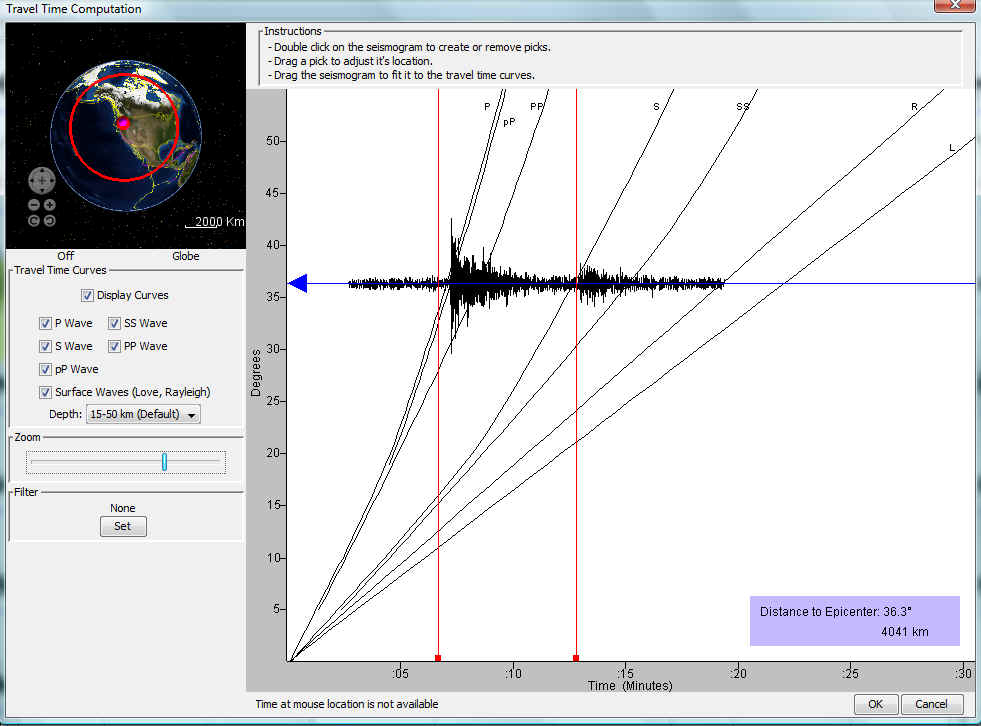 jAmaSeis can be downloaded from the IRIS website at jAmaSeis.

To get jAmaSeis up and running with your Raspberry Shake:

We originally developed rsudp as a way to visualize live data, but it has morphed into so much more than that.

rsudp is a program designed to receive a datacast (see Raspberry Shake Data Producer UDP Port Output) from a Raspberry Shake or Raspberry Boom and use it to track sudden motion events, send out social media alerts, play alert sounds, and more. 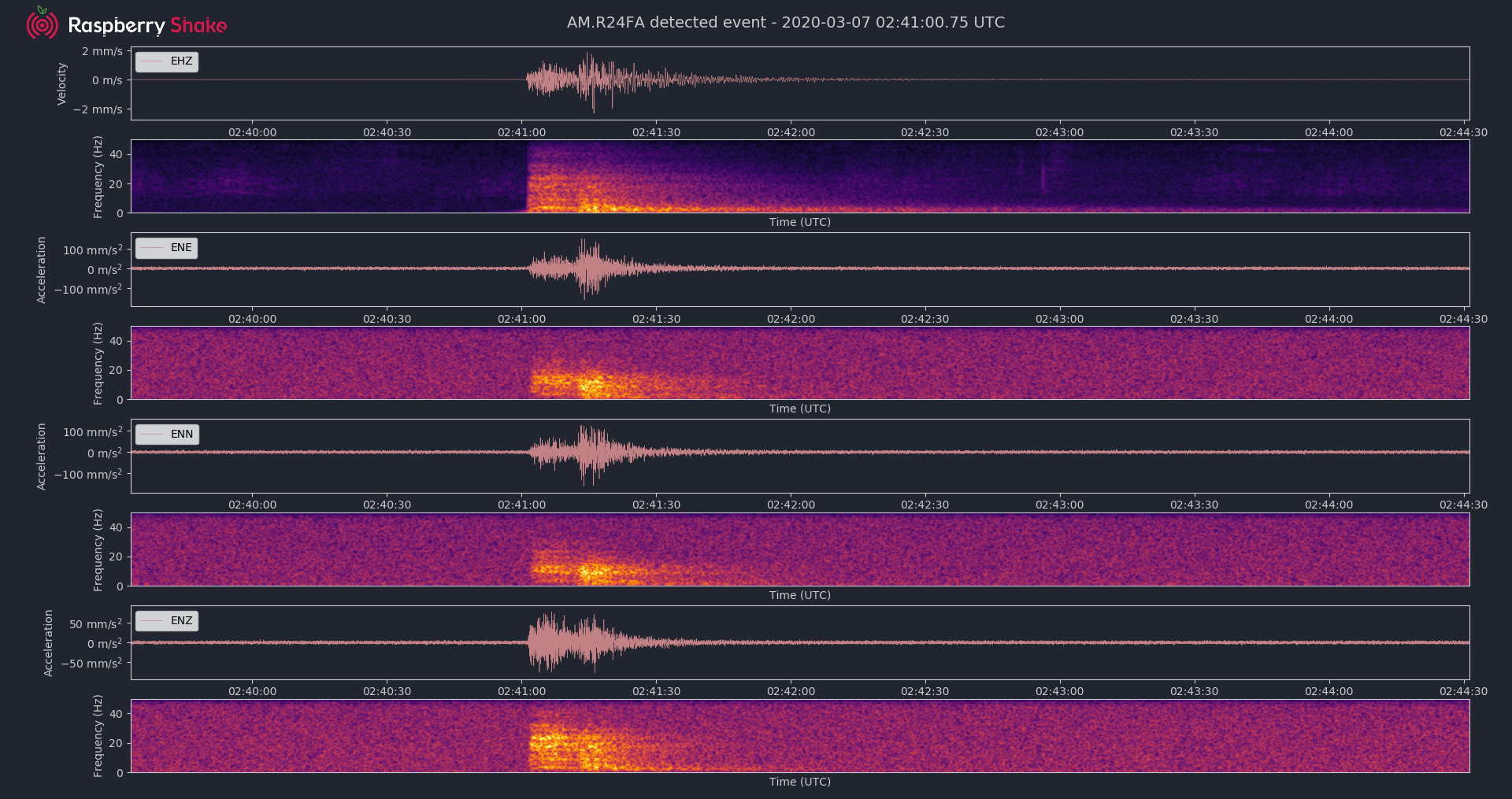 rsudp is open source and written in python, but can be run by coding novices and non-coders alike. Please read the documentation first, then ask relevant questions on our help forum for help.

The source code lives here, but we recommend following the installation guide for installation instructions, because it has some tricky dependencies like numpy, which are not always simple to install.

The full tutorial is here.

seisgram2k is a great program for visualizing earth motions recorded by your Raspberry Shake’s in real-time:

You can download seisgram2k here. We recommend this version: seisgram2k for schools. This version has some neat additions that are designed for school users and amateurs. The nicest feature is an interactive traveltime plotter which lets users slide a seismogram around on a plot of P and S traveltimes to determine the distance to an earthquake as seen below: 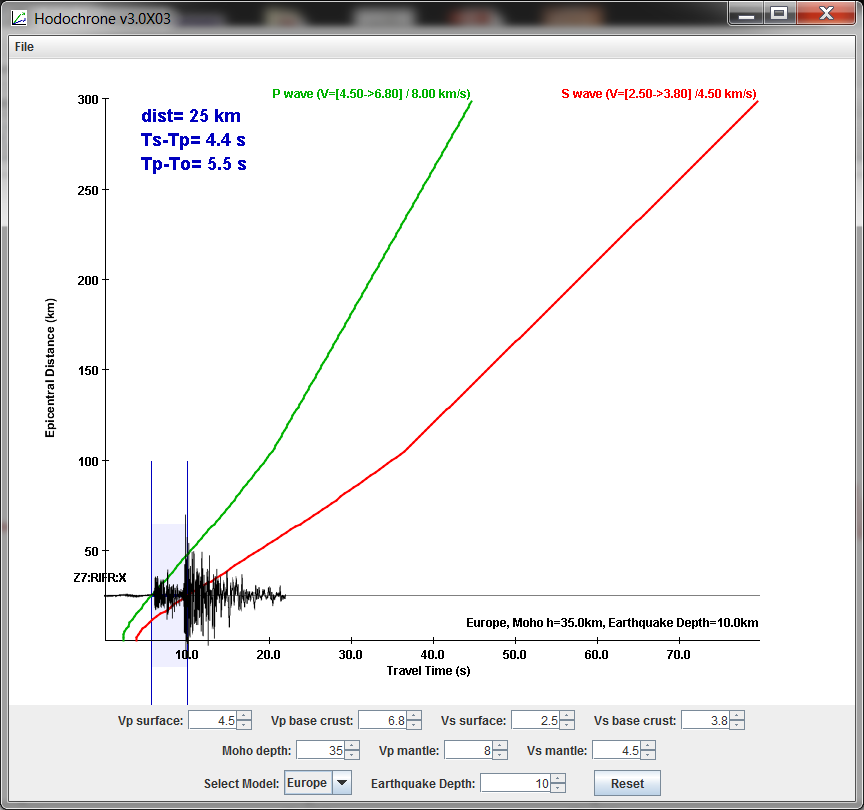 Click here for a short guide on how to use the software.

For Windows users you might consider creating a batch file containing the following:

Swarm is an extraordinary and useful tool that will allow you to enjoy, explore, discover and understand earthquakes in a simple way. Swarm allows you to visualize the seismic data from your Raspberry Shake from your desktop or laptop computer. Swarm was developed by the USGS Volcano Hazards Program and is easily the most widely used seismological application. It runs from your desktop or laptop computer on Linux, MAC and Windows and remotely accesses the data from your Raspberry Shake. 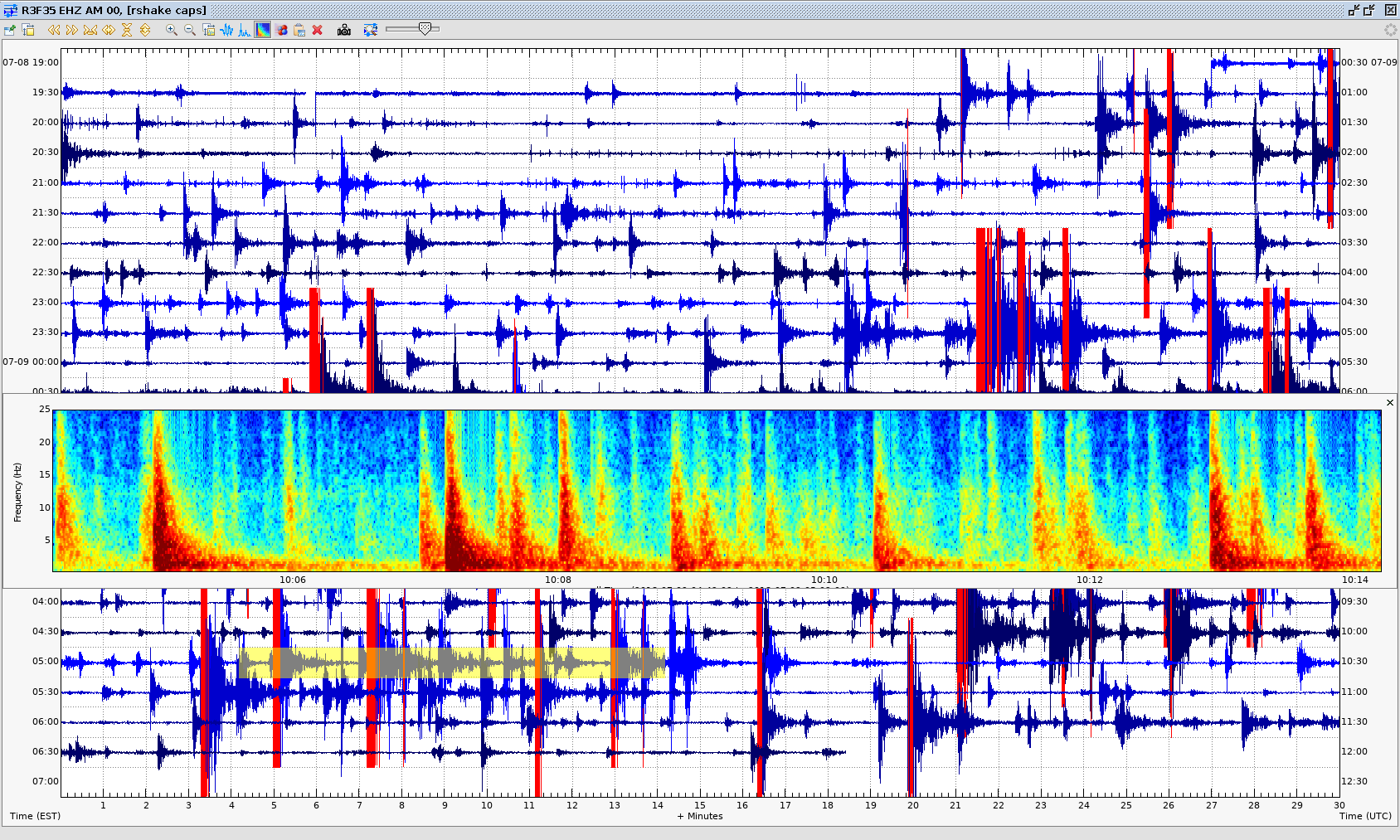 July, 2018 Volcanic activity at Hawai’i - hundreds of earthquakes per day!¶

You can download the preconfigured Swarm application from http://rs.local >> Actions icon >> DOWNLOADS >> SWARM.

For those running Swarm on Linux, including Raspberry Pi: Swarm will only work with the Oracle versions of Java. You will get strange bugs and errors if you try to run it with any of the OpenJDK versions.

(if you don’t know what this means, you’re probably on Windows or Mac and you’ll probably not run into this problem)

Click here for the USGS’s tutorial on how to use Swarm.

Data from this data source is not provided in real-time. It is delayed by 30 minutes. You will notice the data updates in the helicorder display but remains at t minus 30 minutes. For real-time data, use the myShake data source referenced above. Click here to learn more about the Common Acquisition Protocol Server (CAPS).